Today, I’m going to tell you about the story of an obscure kernel bug, how we missed it, and how we’re still recovering from the effect

I should preface this by saying that, generally, I like virtual machines.
I have 5 actual servers doing actual things- everything else is a VM in a racked bunch of servers hosted at Telecity in east London.

Generally, these servers are catered for with two uncontested fibre-to-the-rack lines which are layer-4 DDoS scrubbed and redundant power from two seperate generators and dirty feeds. – believe me when I say, no expense is spared on that rack, it’s where 90% of my budget goes and as well it should, given it’s the core business of the company.
I should also preface this by saying ubuntu has held hatred of mine for some time- given we had a development server here in the office and it failed due to a name change of lvm2 to lvm in initramfs causing our server to die irrecoverably and about a days worth of work getting it back in working order (with no documentation on how to do that :)

Anyway, back to our illustrious datacenter!
While at lunch one fateful monday, a rather hurried and out of breath CIO rushes to the bench where I’m eating food: “Sites down”, he stammered.
“Wonderful” I replied, opening up a terminal and going straight for the logging server. – I found that nothing could speak to our database.
After checking the database servers were indeed reachable, and functioning to expected parameters, and having not received any host based alerts, I conclude that “someone changed the code”, however.. I was wrong-
getting back to my desk I check I find that.. the mysql-proxy servers were unreachable, and both ones used happen to be on the same virtual host. Nothing on that virtual host is responding, in fact, neither is the host itself- it hangs in limbo when trying to ssh in.
“Awesome” I think, while logging into the iLO and remembering I don’t have java installed on my machine… No console logs for me!
After hitting the reset switch, I go back to the logging server- we do log kernel events, hopefully we’ll see what happened before it died.

This has to be an offset error..

After searching for a while I found a relevant Server Fault article. (credit to IRC, somebody else found this article) 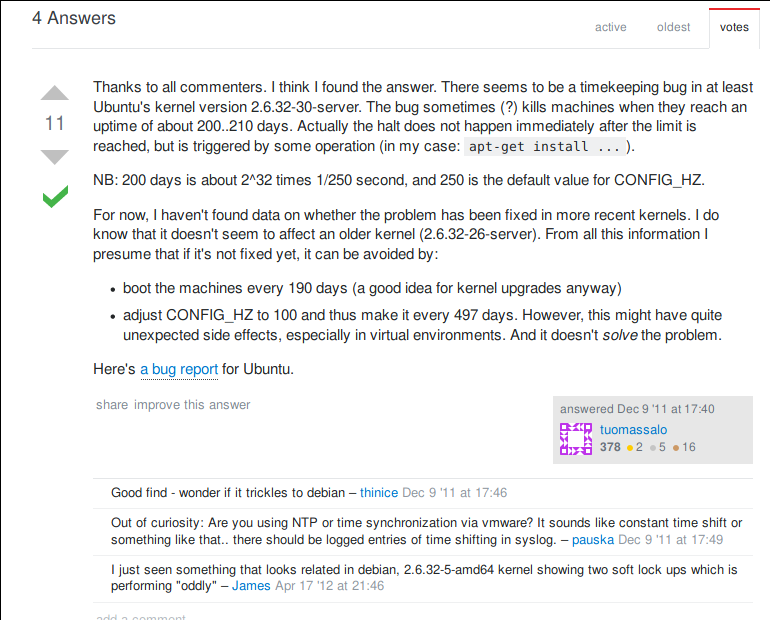 So, if a server is up for more than 200~ days, it will overload the value used for storing the value and cause a kernel panic..

I tend to upgrade my servers in batches in the same week- giving them all a very similar uptime; lets check another machine:

Looks like that’s the culprit, that’s not good. My next question immediately being “Why on earth was I not alerted that a good 10 servers and their host just disappeared”

This question, unfortunately, was disturbingly answered quickly when I read the manifest of the servers running on that host, one of them being our ‘temporary, lets see how it goes’ zabbix server which was also running the web interface, the alert script, and the database.
It’s also the box that didn’t come back.

This was three days ago, I’ve been on a crusade to reboot the servers and hope the patch is actually in updates for ubuntu 10.04.

Our monitoring system is still offline, but at least now Christmas is over and I can work on making a true system.

Reminder: Keep your IRC Email up to date

If you’ve registered with NickServ on darkscience within the last few years then you’ll have used an email address and we’ll have sent you a mail to verify it. That will probably be the last time you heard from us… …until you forget your... Continue →