Microsoft Teams; using one monopoly to aid another

The title is not going to be a surprise to anyone reading this, but I’m getting frustrated and I have to vent.

At Sharkmob1 we use Microsoft products… not really surprising; Microsoft Office is extremely common and- we make games.

What is nice about Sharkmob is that we get a lot more freedom to pick tools that work well for us, at Ubisoft2 it was often an uphill struggle to get anything paid for (so: things like SSO never happened, and you had a seperate account for everything! BAH).

The reason I say this is because Teams being free for Office users is an immediate sell. It doesn’t matter if anything is better or if teams is awful. (and I’m not saying that, even if I personally dislike it), but this is enough for Ubisoft to just use it without further reason.

However, at Sharkmob we can have Slack enterprise, Github Premium, Zoom, 1Password, Jetbrains, whatever works best, and we use Okta SSO for literally everything.

I love this, but apparently Microsoft do not, as they have not been chosen as the blessed instant messaging system, and they will do anything in their power short of pointing a gun at our heads to ensure Teams is used.

Let me explain what I mean:

I only really started noticing Teams being pushed quite heavily when we migrated to Office365 and AzureAD, suddenly Outlook would make every meeting a teams meeting automatically and you had to manually opt-out each time.

They do warn you of this, but only if you hover over the little icon: 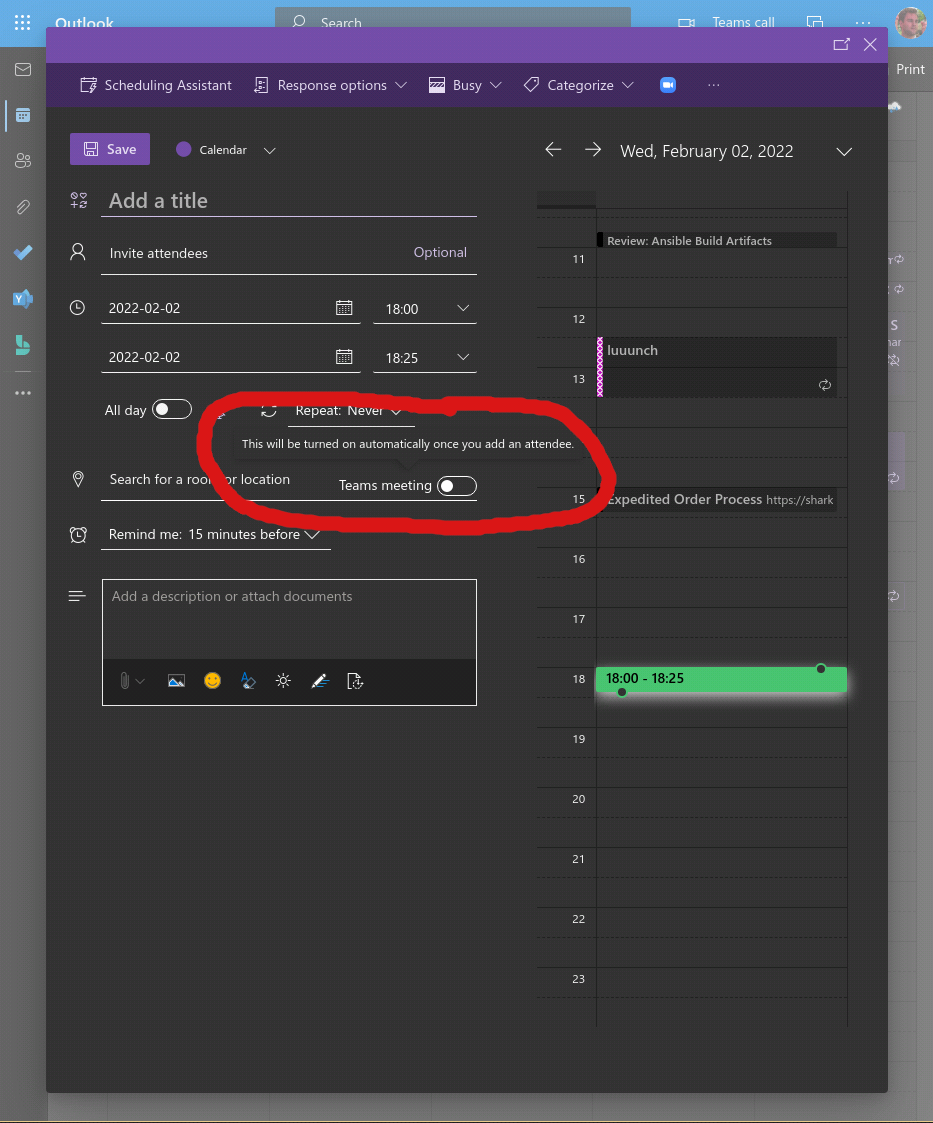 And sure enough if you add an attendee: 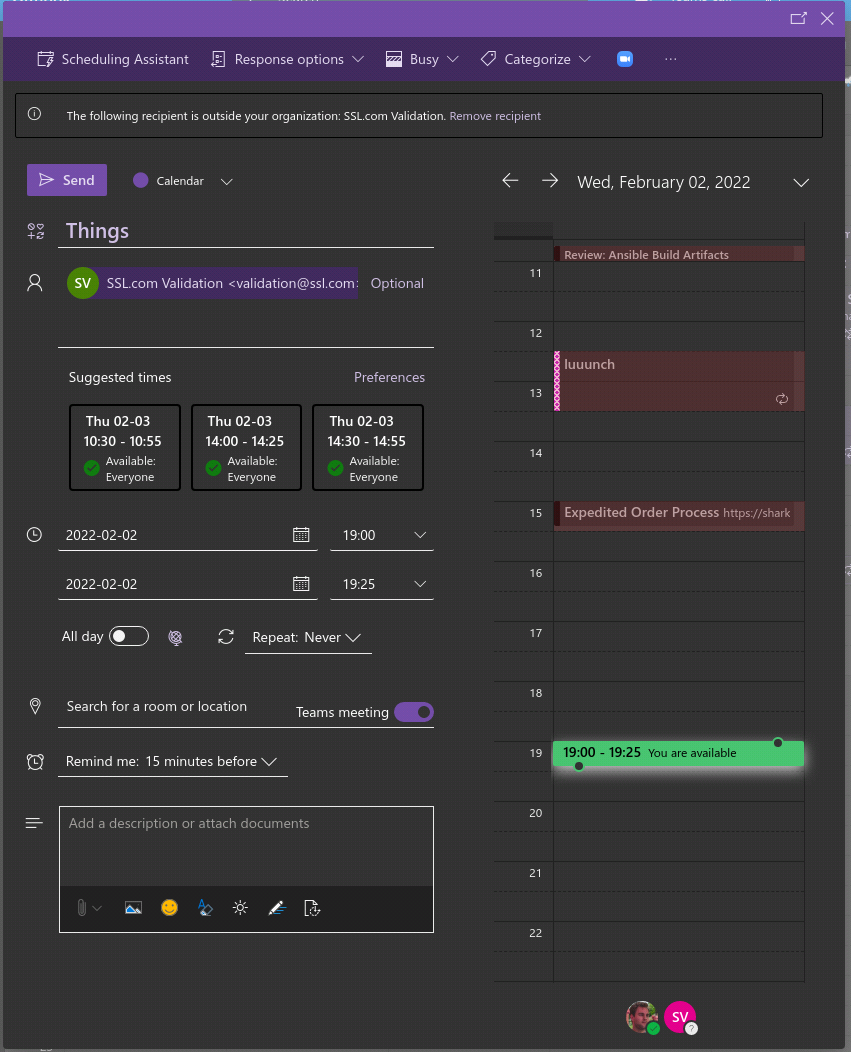 But I explicitly did not enable that, I unchecked the automatically checked box and pasted in my tasty little zoom link. 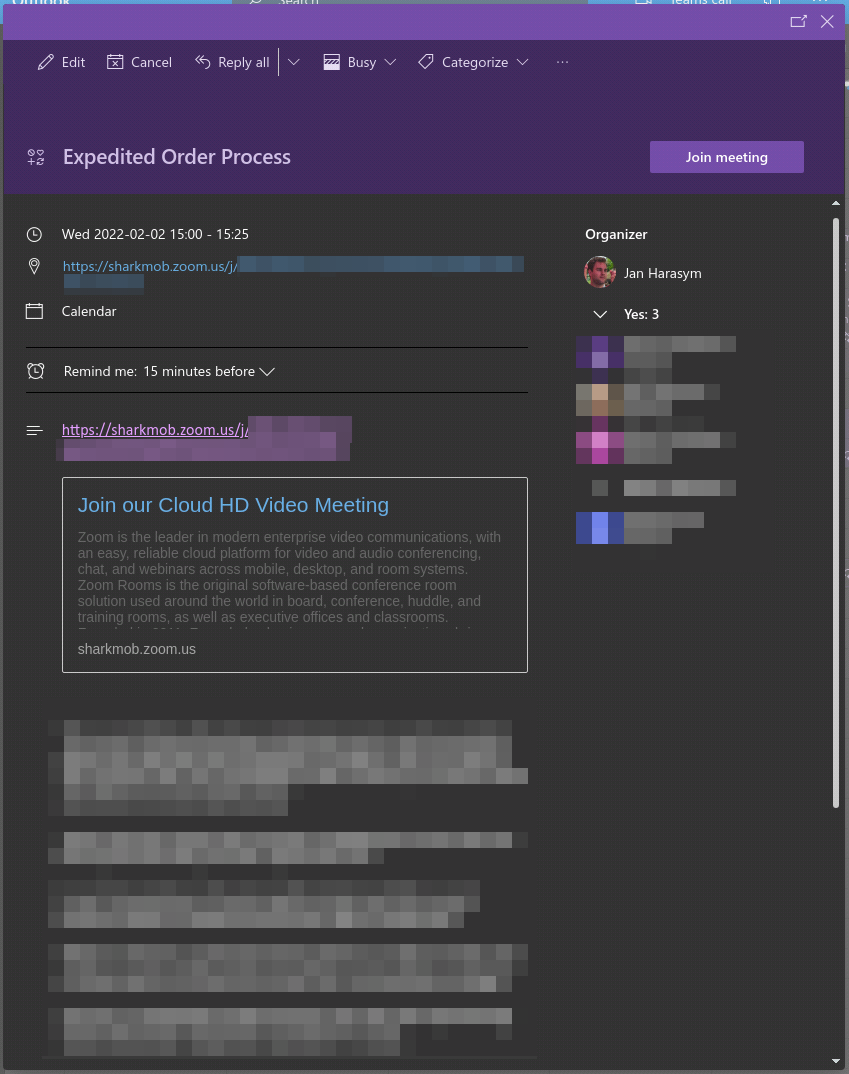 However when I open my phone I’m greeted with:

I discussed this with my IT department

“Can’t we disable Teams with GPO”

“Don’t forget windows 11 forces teams, cant be removed. And its personal teams only, you cant login with a "professional account” on it . that is a a separate app"

On searching for “How to remove teams via GPO Windows 11” I was greeted with a lovely well instructed page which basically says: “You need to make a scheduled task that removes teams every day”

Hell, there’s even an ugly “Teams Call” text button in the web version of outlook; you can’t escape it.

I might be in the minority: but I don’t like being told what to do, so I’m going to find some way of sabotaging the Teams installation mechanism for all machines at Sharkmob.

When I start at a new company, I always do a refresher on my key security. One thing I always hate about SSH is that the encryption scheme is pretty basic actually, and once your ssh-agent is loaded- anything can just request a... Continue →